Mentor groups are provided with wish lists from a family or part of a family. Members of the STVM community are welcome to contribute to this long-standing tradition. For more information contact our STVM Campus Minister at campusministry@stvm.com.
This giving season, families will again be sponsored by the STVM community through these local organizations/institutions: 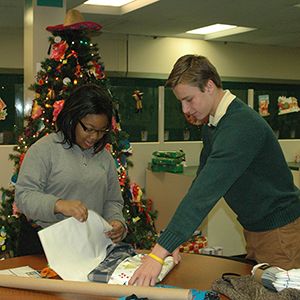 In 1984, Mrs. Luanne Richardson, a STVM Social Studies teacher, was approached by a couple students in her senior homeroom who wanted to “do something nice” for a family that might be struggling during the Christmas season. They knew that they would be having wonderful a Christmas with their own families and wanted to do the same for some other area family that might be having a difficult time providing such an experience for their children. So, Mrs. Richardson decided to contact St. Vincent Parish across the street and ask if there might be a family that her homeroom could “adopt” and help provide some food, gifts, and other essentials. Students in the homeroom gathered clothing, toys and personal items, wrapped them in festive Christmas wrap and delivered them with the help of St. Vincent Church personnel. That family definitely had a much brighter Christmas that year.
Such was the beginning of the STVM “Adopt-A-Family” program that has become a signature community outreach program during the holiday season ever since. Because other teachers and students saw what was happening in Mrs. Richardson’s homeroom, they too wanted to participate. During the Christmas of 1985, administrators decided to get the entire school involved.  Working with the St. Vincent de Paul organizations and a couple of local parishes, STVM homerooms adopted multiple families and provided them with a nice Christmas. Sensing that this project might be able to have an even larger impact on the greater Akron community, STVM administrators decided to propose to administrators of the three other Catholic high schools—Hoban, Our Lady of the Elms, and Walsh—that, setting aside rivalries, this could be a joint community service project spearheaded by the National Honor Society members in each of the schools. An agreement was reached; leaders and advisers of the four schools’ National Honor Society chapters met and organized the project with outreach to many of the Catholic parishes in the area. This joint school venture continued for a couple of years, but the logistics and some scheduling difficulties proved to be problematic, so by the late 1980’s, the program rested exclusively back with STVM.
When the Campus Ministry and Peer Ministry programs were launched back in the late 1980’s, school administrators decided that this might fit well with the mission of these groups, so the Campus Minister and Peer Ministers (now Marianist Ministers) assumed responsibility for organizing and carrying on the programs. Continuing to partner with local parishes as well as local social service agencies, they gathered information on families in need, such as ages of children, and wrote down their “wish lists,” sometimes even visiting the families to meet them first hand so that they could share their experiences with their classmates.
Each homeroom “adopted” a family, or maybe some family members if the family was large, and gathered gifts, food, gift cards, and other items to provide a bright Christmas for the family. Sometimes peer ministers collected cash from their classmates and became Santa’s elves shopping for items on the “wish list.” In the weeks before Christmas, lots of frantic wrapping, ‘’oohing and aweing” over a cute Barbie doll or some rare Pokeman cards, and figuring out of if some snow pants would fit a three-year old could be seen and heard in the halls and the classrooms. What was especially touching was that for many years there were really no incentives for students to participate in the project other than simply wanting to help out of the goodness of their hearts. Eventually a prayer service was added at the culmination of the project with all the wrapped and bagged gifts brought into the gym (everything from stocking stuffers to bicycles and beds) and personnel from the parishes and agencies invited to reflect on the true meaning of Christmas and to celebrate a job well-done. Students and staff left for Christmas break with a stronger appreciation of the true meaning of Christmas. Over the years, additional “Santas” have been added to the mix with non-homeroom faculty, the auxiliary staff, and the alumni also adopting families.
It is hard to quantify the number of individuals and families the “Adopt-A-Family” project has touched in its existence, but throughout the years around 700 families have received a better Christmas than they might otherwise have had. Although students and staff might not see first-hand the fruits of their labor and love on Christmas morning as the presents are unwrapped, some of the touching thank you notes that we have received express the gratitude many recipients feel, especially for their children. Hopefully this project will continue to enable our students to see the need and struggle of those less fortunate, to respond with understanding and generosity, and to experience the joy of giving. As a Marianist school, we can exemplify the Marianist charism that “we are people of community.”
Note: Some of the information for this article was found in Luanne Richardson’s An Irish Memoir as well as articles from The Leprechaun Gold in the 1980s.